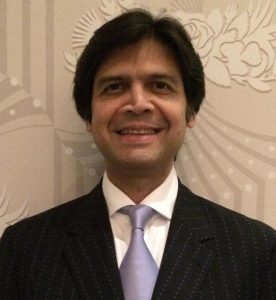 Mr Mohan trained in Trauma & Orthopaedics in Nottingham and London. He began his career at the Queens Medical Centre, Nottingham and moved to the Royal National Orthopaedic Hospital, Stanmore for a period of basic science research before being selected for specialist training on the Hammersmith (West London) rotation. He finished the circuit returning to the RNOH Stanmore, thereafter being appointed as Consultant at St George’s Hospital, Tooting in January 2006.

His main area of work is Children’s Trauma & Orthopaedics. Within this, he has a sub-specialty interest in disorder of the Child and Adolescent Knee. These include patello-femoral joint instability, osteochondritis disecans (OCD), arthroscopic interventions like meniscus (repair or exision), and ligament (reconstruction) injuries in the under-16s as well as young adults. He also has a keen interest in paediatric trauma.